The Broadstairs Food Festival will have over 100 stalls showcasing regional produce, a refreshment marquee, a vintage tea parlour, cider house, Chef’s Theatre and a vast selection of kids activities. Promising an all round family fun day.

There will be plenty of opportunity to taste the best of local produce and learn new tricks from the chef demonstrations and learning workshops and plenty to keep the kids entertained too.

The Broadstairs Food Festival is a 3 day event showcasing the very best of food, drink and culinary skills from in and around the Kent area. There is lots of tasting workshops available in the Chefs Theatre where chefs including chefs from Taste of Game (the theatre sponsors) and local chefs demonstrate their culinary skills to the foodie audience.

The Broadstairs Food Festival will give the opportunity to taste a wide variety of local specialities including: pastries, breads, raw milk, organic vegetables, sourdough, Kent cheeses, pickles as well as a selection of local award wining beers, ciders, spirits and street-food cooked to perfection.
The Broadstairs Festival is a free festival. Anyone and everyone is welcome to come along and take part without being charged an entry fee. 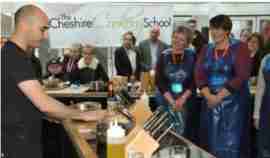