Chlorine Dioxide Water Treatment – Chlorine dioxide has been tested and compared to other available disinfectants with very positive results.

Chlorine Dioxide Water Treatment is more effective and quicker acting than other water treatments and is also effective at lower concentrations.

The concentrations of chlorine dioxide needed to achieve effective disinfection are far lower than chlorine.

Chlorine dioxide which is abbreviated to CLO2 is not a form of chlorine and doesn’t chlorinate.

Chlorine dioxide water treatment doesn’t taint the taste of the water like chlorine does nor does it have a strong odour and there are no carcinogenic by-products.

The low oxidisation of chlorine dioxide means it can penetrate biofilm and is the most effective disinfectant to remove biofilm, including limescale, iron and manganese.

Chlorine Dioxide does not combine with organic compounds to form environmentally hazardous by-products such as Trihalomethane.

Due to chlorine dioxide’s lower oxidation potential, it doesn’t hydrolyse to form an acid, so it is less corrosive.

All of our range of 3 Solar Water Pumps are contained in their own secure boxes complete with automated water treatment, electric fence connection points and additional charge capacity. 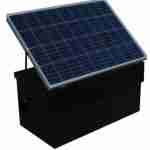 Our Solar Powered Pumps use the best quality solar panels to ensure maximum usage throughout the year, even on cloudy days with less sun. Our quick-release battery housing allows easy fast charging in the winter months when necessary.

Using a submersible pump unit the Midi water system can pump water 60m from the watercourse to a water tank or multiple troughs:

Capable of pumping up to 3000 litres of water a day

Using a high-powered submersible steel pump the Maxi water system can pump water 60m from the watercourse to a water tank or multiple troughs:

Capable of pumping up to 3000 litres per hour

Using a high-powered submersible steel pump the Maxi water system can pump water 160m from the watercourse to a water tank or multiple troughs:

Capable of pumping up to 4000 litres per hour

No fuel, No energy, No bill and a 5 year guarantee

Rainwater harvesting enables you to cut or eliminate water costs.