Remember: Efficiency is the key, it saves both time and money!

The UK cattle industry loses millions of pounds a year due to health related performance and deaths in cattle. Disease events such as Bovine Viral Diarrhoea Virus (BVD) and Bovine Respiratory Disease (BRD) commonly result in an increase in core body temperature.

The use of intra-ruminal temperature monitoring bolus devices has been explored for more than 40 years. These battery-operated boluses are designed to rest at the bottom of the reticulum.

The weight and size of the bolus prevent passage through the digestive tract. As developments in battery technology has occurred, it has made the bolus much more reliable across the lifespan of the animal.

Remote means of detecting increased body temperature due to disease leads to more rapid and reliable detection, thereby decreasing severity of illness and minimising reductions in performance. A rumen bolus programmed to read and transmit core body temperature orally dosed to cattle is used with the age old saying “prevention is better than cure” in mind.

“Prevention is better than cure”

Imagine you could tell you were getting a cold 48 hrs before the first tickle in your throat or sneeze, you would take preventative measures and wouldn’t get a cold. It’s exactly the same with cattle.

If you knew the animal was going to get sick you could treat it and save yourself a fortune.

Do not be blinded by fancy systems claiming to do the vets job, they don’t exist! You want to be able to see if an animal consistently has a high temperature over a 3-hour period, if it does treat it, if the temperature doesn’t come down call your vet.

This is what will happen:

Body temperature has long been used as a method of evaluating health status of livestock. The normal body temperature of cattle during periods of thermoneutrality ranges from 38.2°C for non-pregnant cows to 38.7°C for young calves.

Body temperatures exhibit diurnal variations as cattle are not nocternal, with ranges of 0.7°C and 0.6°C for cows and calves, respectively, with maximum temperatures generally occurring during the early afternoon Body temperatures, however, can be highly variable.

There are many factors that influence body temperature of cattle. Cattle suffering from illness frequently exhibit elevated body temperatures, with 39.7°C indicating a need for treatment.

Many methods of remotely monitoring body temperature in cattle have been explored and appeared in the market place over the past few years. Traditionally aimed at the Dairy Sector, due to costs then being able to be spread over a longer animal lifespan.

These bolus devices are still for most part non viable due to cost for most UK farms.  With prices ranging from £60 – £100 per animal they quite simply are not sustainable, especially in the beef sector.

Below is a brief overview of the different methods of temperature monitoring available on the market. 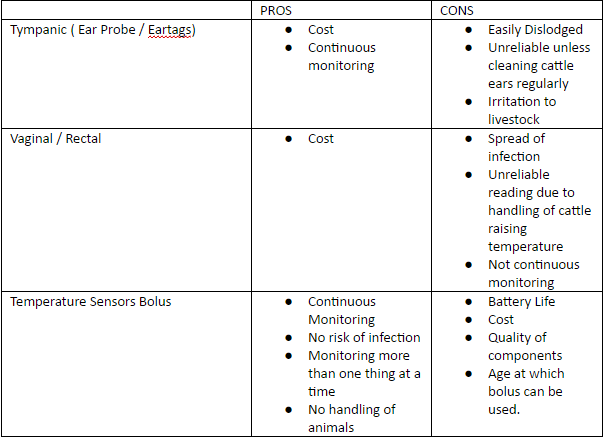 The feasibility of each of these methods is dependent upon the stage of animal production, and the reliability of the device.  Ear infections may also become a problem with eartag/probe temperature monitors, and these types of devices should be rotated between ears every 7 to 10 days.

The use of eartag/probe temperature monitoring systems is best suited for short-term monitoring situations, as temperature probes must be frequently maintained. Ear temperatures are more variable than rectal temperatures, likely the result of decreased response time to both internal and environmental factors.

Rectal and vaginal temperature monitors must be checked frequently, as unclean probes in the rectum or vagina may lead to infection. This is a time consuming solution and also cause extra stress on the animal as moving them will be required to perform the procedure.

Additionally, vaginal temperature monitors may be feasible for use in a dairy, but not for beef systems, where a high percentage of cattle are steers.

The benefits of Agrismart’s Bolus

As with everything we do, we looked at things differently. We have been monitoring temperature in cattle over the past 5 years to get a true understanding of what can be achieved. We then realised that the most important sector for this equipment is the beef sector.

The results of being able to identify abnormalities in temperature, indicating that illness was present translates to:

There has never been a bolus device on the market that is commercially priced to use on beef animals due to the shorter lifespans and low margins involved in production.

We have been able to look at the numerous solutions on the market, testing them, evaluating them and decided to make our own. Using our unique R&D capabilities alongside our practical understanding of agriculture we have been able to deliver a solution that does exactly what is needed at a price that has never been seen before.

Imagine you could tell you were getting a cold 48 hrs before the first tickle in your throat or sneeze, you would take preventative measures and wouldn’t get a cold. It’s exactly the same with cattle.

If you knew the animal was going to get sick you could treat it and save yourself a fortune.

Do not be blinded by fancy systems claiming to do the vets job, they don’t exist! You want to be able to see if an animal consistently has a high temperature over a 3-hour period, if it does treat it, if the temperature doesn’t come down call your vet.

This is what will happen:

How the bolus works

The bolus is inserted into the animal at the earliest opportunity.  The bolus transmits temperature readings to receivers, installed in the building, that transmit the data to an on-site computer where the temperature, animal identification, date and time can be viewed and are recorded.

If a larger area is required to be covered, repeaters are installed that allow the information to be bounced to the onsite computer. The data is recorded in real time and continuously records to the computer. As a result, an animal’s rise in body temperature from exposure to an immune challenge can be seen without manually taking the animals temperature. 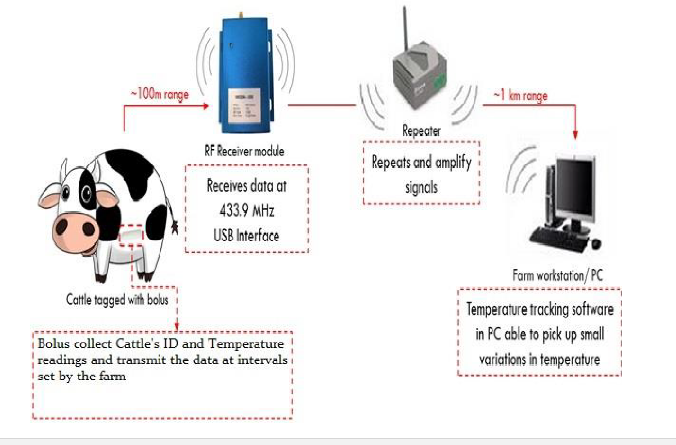 Water supply is becoming one of the major costs to industry, both at farm level and in affiliated sectors, processing, manufacturing, horticulture, equine and recreational diversification such as golf courses.

Our aim is to identify high water users and present them with a solution that costs less than their annual water bill providing free water for their business with an ROI in under 24 months.

To reduce your water bills by at least 75%

We have a dedicated team of Water management technicians who specialise in the collection and storage of water on your farm. In the UK it rains and when it doesn’t it pours. This water is often wasted and a completely untapped resource. Harvesting this rainwater is a great way to provide your business with an additional water source that falls free from the sky.

Water from a natural source running into the pump gives it the energy it uses to function.No fuel, No electricity, No bill. A product guaranteed for 5 years and a step ahead of all the alternatives in the market currently.

We have a range of stormwater management solutions adapted for your needs to reliably remove harmful pollutants from stormwater runoff.

We only supply the best quality water storage tanks from the UK leading manufacturers, allowing us to source the right storage solution for your business, even if we have to have it custom made.

Our complete rainwater harvesting solution adapted to suit your circumstances. Enabling you to cut or where possible eliminate water costs.

We have a dedicated team of regional installers ready to view your site. We specialise in creating the best and most efficient solution for you. In essence, you have a unique water system tailored to your needs.

At Agrismart we are always looking to add to our farming solutions product range available to farmers. If you have a product that offers a solution to modern day farming issues and saves farmers money, or you can produce a product below the current market value get in touch.