Sheep farmers need to be on guard as the weather finally warms there is a high risk of nematodirus!

With the UK temperature finally set to rise to a more appropriate level for this time of year, and as we our finally going to get weather appropriate for Spring. Typically this is going to cause farmers or rather sheep farmers another set back, namely nematodirus.

February and March born lambs are at high risk of nematodirus as a sudden increase in temperature means a higher risk of the disease to lambs grazing in fields grazed by last years lambs.

This information is released by the Sustainable Control of Parasites in Sheep (SCOPS) group.

According to Scops who have released a warning to sheep farmers of “moderate risk” in most lower lying areas of England according to the Scops nematodirus forecast. Their moderate risk warning is an indicator that they are within a 10 day period of a hatch.

Drastic changes in climate are the cause of the warning. This years weather so far has been causing endless problems for farmers already, as the extremes of cold, wet and even snow blighted weather has cost farmers in extra feed, due to extended winter. Livestock losses due to weather extremes and now due to the drastic change in temperature, yet another hit!

The increase in temperature means that it is highly likely that a hatch of overwintered nematodirus larvae can be expected.

The Scops group advice sheep farmers to monitor their nearest weather station on the Scops website to assess their risk, as research so far has shown that the hatch rates have been highly variable from farm to farm by geography.

Herefordshire is known to be developing the first signs of the nematodirus disease being discovered on several farms in the area. Sheep farmers are advised to keep checking the forecast on the Scops website which shows an interactive map which is updated daily.

Nematodirus symptoms are acute diarrhoea which then causes sudden dehydration and unfortunately leads to lambs deaths across many farms.

Outbreaks of nematodirus can be very sudden and sheep farmers need to vigilantly look for early warning signs and act quickly to treat with anthelmintics.

Anthelmintics or antihelminthics are a group of antiparasitic drugs that expel parasitic worms (helminths) such as Nematodirus and other internal parasites from the sheep’s body by either stunning or killing them and without causing significant damage to the sheep.

Nematodirus is a parasite that is a serious threat to lambs at best it will have a serious impact on growth and live weight gain and at worst it could kill up to 5% of lambs in a flock if not treated quickly.

Adult sheep fortunately build up a natural resistance to nematodirus. 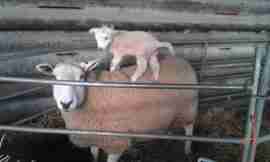